At Patna, addressing –prayer meeting said that 15th August should be celebrated by fasting, spinning and prayer.

In response to H.S.Suhrawardy’s request to extend stay in Calcutta,proposed to live with him and work to-gether till every Hindu and Muslim was safe.

At prayer meeting , announced that he and Suhra-wardy would live and work together in disturbed areas until peace was restored.

Moved into “Hydari Mansion” in riot-affected area where , on arrival faced angry demonstration by Hindus.

Had discussion with Rev. John Kellas.

Visited industrial area at Kancharapara where Police had resorted to firing near a mosque.

In interview to Press, declined to comment on political matters as he wanted to utilize the media for Hindu-Muslim unity.

Invited readers’ opinion about the desirability of continuing Harijan weeklies.

Was described as “one-man boundary force” by Mountbatten in letter. In interview, told Randolph Churchill that he still considered partition a “sin”.

Deeply disturbed by cruption of violence , went on fast at 8.15 p.m. to be given up “only if and when sanity returned to Calcutta”. In talk with Rajagopalachari , refused to give up fast.

Put off scheduled journey to Lahore; in evening , had talks with Sarat Chandra Bose and P. C. Ghosh.

Had discussion with Hindu and Muslim representatives.

Broke fast after assurances from leaders of all communities to stop riots and maintain communal harmony.

In message to Shanti Sena Dal said: “My life is my message.”

Visited Gobra Leprosy Hospital and spoke to patients and staff; left for Delhi .

At prayer meeting, referred to disturbances in North-West Frontier Province.

Spoke at R. S. S. rally ; abandoned prayer due to objection to recitation from Koran.

At prayer meeting , exhorted people to curb anger to qualify themselves for independence.

Addressed Muslim gathering in Daryaganj mosque; had discussion with Suhrawardy.

Addressed prayer meeting although prayer had to be abandoned, as recitation from Koran was objected to.

In discussion with Jam Saheb of Nawanagar, advised rulers of Kathiawar to remain united.

In talk with J. B. Kripalani, reiterated opposition to permanent exchange of population.

Had discussion with Suhrawardy.

On his 78th birthday when advised by doctors to take penicillin , declared that Ramanama was his sole remedy.

In Speech read out at prayer meeting emphasized need for self-sufficiency in food.

Had Discussion with Suhrawardy.

Spoke to Gujaratis who presented purse in honour of his birthday.

In Speech at prayer meeting emphasized need for cleanliness and sanitation in refugee camps.

In letter to Julian Huxley, wrote:”rights to be deserved and preserved come from duty well done”; gave interview to Gujarati correspondents of All India Radio.

In afternoon, explained significance of silence to Lady Handes.

Had talks with Christian pacifists and Muslims.

Had talk with communists.

Advised Muslims to resolve on Id not to spill blood but to offer it as sacrifice.

At prayer meeting called upon the Services to rise above communalism.

Advised Sind Congress leaders to settle down in villages, if they had no courage to return to Sind.

At prayer meeting exhorted people to uphold their religion without any fear.

At prayer meeting, referred to condition of refugees in kurukshetra and events in Kashmir. Met Horace Alexander .

At prayer meeting referred to events in Kashmir.

At prayer meeting, Spoke in favour of lifting food control.

Attended food Committee meeting and discussed removal of food control. At prayer meeting , referred to his proposal of lifting food control . In interview to Chinese delegation gave message of peace and non-violence.

Gandhiji was in Delhi . Had talks with Shankarrao Deo , J.B. Kripalani, Rajendra Prasad, Manibehn Patel and Amrit kaur. Attended Congress Working Committee meeting . In his address at prayer meeting defended Government of India having taken over administration in Junagadh.

Gandhiji addressed Kasturba Gandhi National Memorial Trust meeting. Had talks with Sindhi Friends , Vallabhbhai Patel, Jawaharlal Nehru , Sucheta Kripalani and Mridula Sarabhai . In his address at prayer meeting stated that restoration of abducted women should be a matter of first priority with Indian and Pakistan Governments.

Had talks with U. N. Dhebar , Bhaktiba C. P. Ramaswami , Sucheta Kripalani, J. B. Kripalani, Renuka Ray and Jawaharlal Nehru. His speech was read out at prayer meeting. Control on sugar removed.

Had talks with H. S. Suhrawardy , Jayaprakash Narayan and Satis Chandra Das Gupta . Had Discussion with members of K. G. N. M. Trust , teachers and students . Addressed Hindustani Talimi Sangh meeting. In address at prayer meeting dwelt on the activities of A. I. S. A.

Had talks with Pyarelal, Maulanas , Anantrai Pattani , J. C. Kumarappa and Amrit Kaur . His speech was read out at prayer meeting.

Addressed Meos at Jesarah, a village in Gurgaon tehsil. Had discussion with Rajendra Prasad , Vallabhbhai Patel and Jawaharlal Nehru in the morning and again in the evening . Had talks with Pyarelal , Dr . Chandubhai, Dinkarbhai Desai , K.M. Munshi and Maharaja of Kapurthala. Addressed prayer meeting.

Met J. B. Kripalani and Maulanas. Addressed prayer meeting. Had discussion with Vallabhbhai Patel and Jawaharlal Nehru in the evening.

Had talks with Rameshwari Nehru, Vallabhbhai Patel, Sheikh Abdullah, Diwan of Kutch and Abul Kalam Azad. In address at prayer meeting appealed to Nawab of Bahawalpur at arrange for evacuation of Hindus and Sikhs. Had discussion with Jawaharlal Nehru and J. B. Kripalani.

Gandhiji had talks with Amrit Kaur, Anantrai Pattani, Gyani Kartarsingh and Sardar Dilip Singh. In his address at prayer meeting appealed to Government to enforce prohibition. Government of India took over administration of 25 Orissa States.

Gandhiji had talks with Munnalal G. Shah, Subhadra Gupta, Jawaharlal Nehru and Maulanas. In his written speech for prayer meeting commented on decontrol of food.

Vallabhbhai Patel in statement to Press, replied to allegations made by Finance Minister of Pakistan and justified Government of India’s stand that settlement of the financial issues could not be isolated from vital issues like Kashmir. Gandhiji met Jamnadas and Vallabhbhai Patel. In written speech at prayer meeting, announced decision to go on fast to establish communal unity. Called on Lord Mountbatten. Had talks with Jawaharlal Nehru, Jamnadas and Devdas Gandhi. M. S. Aney sworn in Governor of Bihar.

Sixth day of fast. Gandhiji complained of stomach ache, was extremely restless. Over a hundred representatives of various groups and organizations in Delhi came to Gandhiji, signed a declaration of assurance on seven conditions. Rajendra Prasad signed declaration as Congress President. On receipt of assurance prayers were held and Gandhiji broke fast at 12.15 p. m. Gave message to Sikhs on Guru Govind Singh ‘s birth anniversary. Lying in bed, spoke on microphone for twenty minutes; his dictated speech was read out at prayer meeting.

Had talks with Jamshedji, Jehangir C. Patel, Dinshaw K. Mehta, H. S. Suhrawardy and Jawaharlal Nehru. Was carried to prayer ground in a chair, his written speech was read out at prayer meeting. Central Peace Committee formed to implement assurances given to Gandhiji. Government decided to decontrol cloth.

Gandhiji had talks with Jamshedji Mehta Jawaharlal Nehru and Amrit Kaur. While addressing prayer meeting a bomb exploded a short distance away. Gandhiji continued address after the interruption. Madanlal Pahwa was apprehended. United Nations Security Council agreed to set up a three-power commission to mediate between India and Pakistan over Kashmir dispute.

Security measures were tightened in Birla House. Gandhiji turned down suggestion for searching people coming to prayer meeting. Met Sikh deputation. Had talks with Iftikhar-ud-Din and Jawaharlal Nehru. Addressed prayer meeting had to be carried in a chair.

Had talks with Jawaharlal Nehru and Sucheta Kripalani. In his Speech at prayer meeting, paid tribute to Subhas Chandra Bose on his birth anniversary. Kathiawar rulers signed covenant approving creation of Saurashtra Province, a United State.

Revised draft constitution of Congress. Had talks with Pyarelal, Sudhir Ghosh, Maulanas and Sindhi deputation. Had discussion with Vallabhbhai Patel, took his evening meal at 4.30 p. m. while discussion to remind Gandhiji that it was time for prayer. Gandhiji started for prayer meeting supported by Manu Gandhi and Abha Gandhi on either side. As he was approaching the prayer ground, three shots were fired at him at close range. Gandhiji sank to the ground breathing his last at 5.17 p.m. 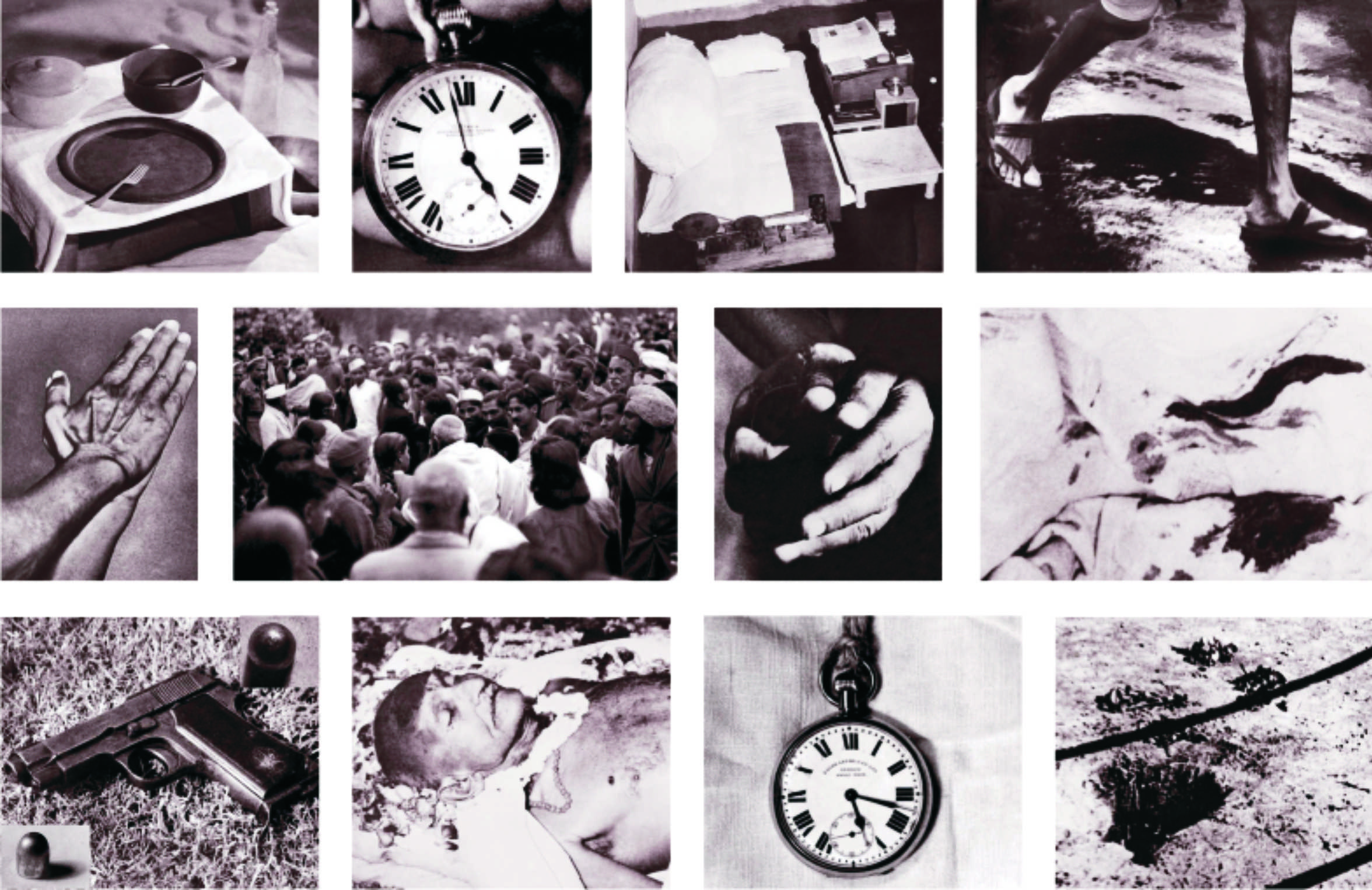